William D. Paterson, Jr. speaks to the Civil War Round Table of the District of Columbia about how and why CSA Lt. Gen. James Longstreet became controversial, on September 8, 2015, at the Fort McNair Officers' Club in Washington D.C.


A copy of the PowerPoint to his presentation is available at
https://drive.google.com/file/d/117w52eVA62pzH7F76R81PMOhiZ7p0Cdk/view

The Origins of the Longstreet Controversy 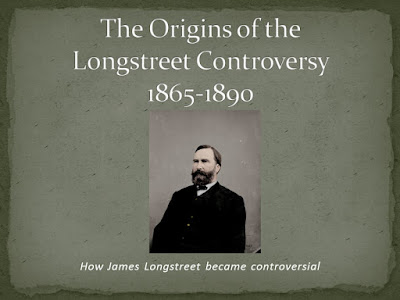 About The Topic:
CSA LTG James Longstreet is one of the most intriguing and controversial figures from our Civil War.  Longstreet was Robert E. Lee’s trusted second in command, outranking Thomas “Stonewall” Jackson. Named commander of the First Corps of the Army of Northern Virginia by Lee, Lee also christened him “my Old War Horse” after his dogged defense at Antietam. Except for five months after a serious wound at the Battle of the Wilderness, Longstreet was with the Army of Northern Virginia from 1861 and First Manassas until its surrender in 1865 at Appomattox Courthouse.

Tactically brilliant, he strongly favored defensive strategies and the counter punch. Some of his ideas were used to great effect in the First World War some fifty years after the Civil War. Educated at West Point, he went into the U.S. Army infantry post-graduation and served in the Mexican War. He performed gallantly and with distinction in Mexico and was wounded in action while there. He remained with the Army after the that war and served in various posts in Texas and New Mexico until secession. He loved the country he served and he was not a major supporter of slavery. However, he was a firm proponent of state’s rights and, like his fellow southerners Lee and Jackson, he could not bring himself to fight against his home states of South Carolina (his birthplace) and Georgia (where he grew up).

He was a man who enjoyed having a good time. He enjoyed playing cards, smoking cigars and pipes, and having a good drink. However, after losing three of his four children to a Scarlet Fever epidemic that hit Richmond in early 1862, he withdrew and did not often take part in frivolity for several years to come. Yet the First Corps headquarters remained a fun one and Lee himself usually sought Longstreet’s encampment for his own. Longstreet cared greatly for the welfare of his men and did all in his power to protect their lives and limbs. He was also a man of his convictions—firm in his opinions, which he freely expressed, to the point that many labeled him stubborn. And he wasn’t afraid to criticize his fellow officers, including his superiors.

James “Pete” Longstreet was like all of the men who became great leaders of the American Civil War--full of flaws and contradictions, brilliance and compassion. His wartime record included some episodes of poor performance but this was no different than those of Jackson, Lee’s other subordinates, or even Lee himself. So, how did this man who fought so valiantly for the Confederate States of America come to be the scapegoat for the Army of Northern Virginia and reviled by so many in the South after the war?

Join us as Dan Paterson, the great-grandson of James Longstreet himself, leads us through an examination of the “origins of the Longstreet controversy.” Mr. Paterson will look at how James Longstreet became the South’s most divisive and debated soldier—even to this day.

Our speaker, William D. Paterson, Jr., is the great-grandson of Lt. Gen. James Longstreet , and  provided the following  information to post on this website:

Married; wife Sherry and son and Daughter-in-law Shane and Melissa and two grandsons Elijah and Jude and granddaughter Rosalie living in Centreville, VA


Past President and current member of the Bull Run Civil War Round Table, Centreville, VA


Board Member of the Pickett Society, Richmond, VA

Participant and supporter of the Longstreet Memorial Fund Project-(Gettysburg Monument).

Recipient of the United Daughters of the Confederacy “Jefferson Davis Award” for preservation of Confederate Heritage.

Civil War Reenactor with the 7th Maryland Volunteers, Co. A (Federal), the Chesapeake Volunteer Guard and the Hardtack Society and Liberty Rifles.


Recipient of the 2001 Helen Dortch Longstreet Award presented by the Longstreet Society to those who work to defend and preserve General Longstreet’s reputation.  The 2002 winner was Dr. William G. Piston author of “Lee’s Tarnished Lieutenant.”


Dan Paterson is the great-grandson of James Longstreet through his youngest son, Fitz Randolph Longstreet, (b. 1869 – d. 1951) whose daughter, Dan's mother, was Jamie Louise Longstreet Paterson and the granddaughter of James Longstreet.  Dan's grandmother, Mrs. F.R. Longstreet (Zelia) was interviewed by Blue and Gray Magazine in 1983 for an article entitled “Daughter-in-Law of a General.”  Dan's uncle William Longstreet (1897-1973) was the last male descendant of the General with the surname of “Longstreet.”


“A Longstreet Pictorial History” is a comprehensive visual history in PowerPoint of the Longstreet family starting with the general’s great-grand father, Gen. John Dent, of the American Revolution, and continuing with the inventor, William Longstreet, the scholar, Augustus Baldwin Longstreet including CW wartime photos/prints, various battle anniversaries photos and concludes with photos of the Longstreet Monument project ceremonies from January 1998 through October of 2001.  The presentation also includes family photographs, newspaper clippings and even photographs from the General’s personal photo album spanning two centuries and several wars.


The “Origins of the Longstreet Controversy” looks at how James Longstreet became the South’s most controversial soldier that includes a detailed timeline showing how events during the postwar period predated the Gettysburg controversy that was generally based upon the General’s support for black suffrage and membership and support for the Republican Party.

www.generalsandbrevets.com/
- A collection of photos of various CW personnel